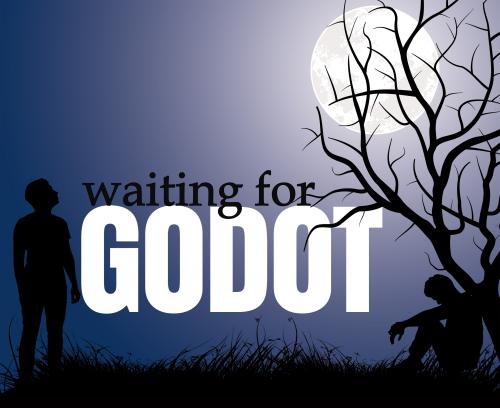 Once upon a time, there were two long-time pals, Didi and Gogo. They waited by the side of a road for a friend of theirs (at least they thought he was a friend) who promised he would come. Didi and Gogo needed to meet up with him because this friend (they were pretty sure he was a friend) was supposed to give them some extremely important information.

They tried to fill time with this and that---clever conversation, fun games, and even spirited arguments. Some interesting people passed by on the way to wherever or somewhere. That provided some entertainment. But Didi and Gogo became increasingly frustrated. Was their supposed friend ever going to show up and give them the information they so desperately needed?

Gogo: I can't go on like this. Didi: That's what you think. Gogo: If we parted? That might be better for us.

Then things got really tense and...

But why spoil the ending for you? Come to Brecksville Theatre and we'll show you how things worked out.

Waiting for Godot is a tragicomedy by Samuel Beckett.